What a wonderful weekend we had at Lauwersmeer at the “Raid Extreme“. I’m still glowing. The weather was very cooperative, with the wind building from very light, to wind force 5 from the west. Apart from a broken rudder, and a duck punt who got stranded in Zoutkamp (trailer job) there were no casualties. Highlights were the island that got renamed into Gin and tonic island, the little girl at checkpoint Zoutkamp that came to bring the “Dora the Explorer” watch (unorganized help), the people who voluntarily offered help and prizes, then the man who showed me his whatsapp message sent to a friend on what a great day it had been (both of us fighting the tear in our eye).
The photos tell the story. 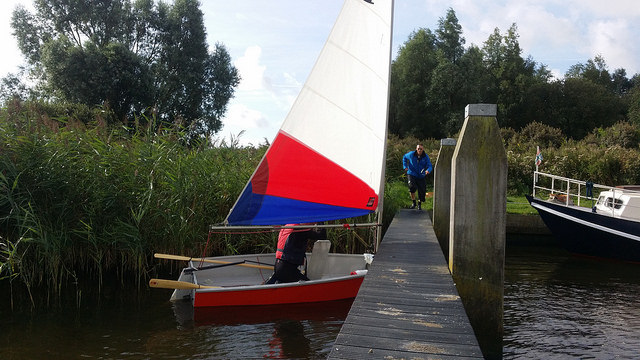 Results there too.
Loads of photos and some video on Flickr

It is not just the Pommies who sail their Solway Dory canoes, or the US guys in their beautiful Bufflehead boats. Canoe sailing is alive on mainland Europe as well.

This weekend was the Kanu Segel Criterium from Kanu Verein Hanseat in Bremen. It is now held for six times, and same as last year, about 20 boats came in all sorts and varieties. Many folding boats (faltboote), with the guys from Faltbootsegel 3.0 leading this pack, Canadian type of boats, traditional sailing canoes who have been sailing for over 70 years and two Artemis boats, of which I built one over the course of this winter. 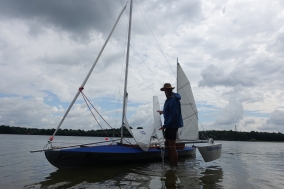 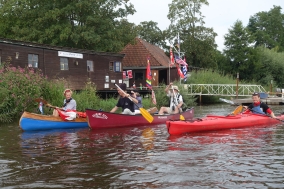 Per showing his stuff

The event is fun. We paddle from the canoe club to a small lake. There, we sail a kind of triangle, and most people kind of not paddle when they sail. There is a kind of startline, and after the three start signals given more or less at the same time we are off. Normally several boats capsize or sink because they put too much sail on, didn’t test their stuff, or were busy drinking bubbly wine.

After the windy conditions of last year, this year was more moderate. There was about 9 knots of wind. Just perfect for my sail combo and the little plank I got to hike from. Sorry to Michael Storer I messed up the visual appearance of his mainsail, but I needed a small jib that I made selftacking to get sail balance, and for a little but more power. At 20 euro for two jibs and a mainsail I couldn’t resist, and the jib seems to like living on the front on my boat.

Amazing to think that just last year I came as a spectator, and now to be back with my own boat, with already lots of trips done in the canoe, and lucky enough to take home the “Hauptgewinn”. Looking ahead for more.

I’m thinking now of adding a rig that clears the many bridges in Friesland, a lug rig, with as high a top as would be doable on a 3 meter mast, with many reefs, and maybe a little gennaker just for fun. It would be fast to hoist and drop when going under a bridge.With that rig, it must be possible to do well in distance races such as the Grouster zeilmarathon, a 42 kilometer trip around Friesland, starting and ending in Grou. Should be interesting…

Lots of tacking and gybing on the Artemis sailing canoe I built this winter. And, it is glorious weather!
Windmills are put in the video just for show. Lots of things on the boat need refinement, many ropes shortened, and I sawed off a bit of tiller on the day, think I have the right length now.
But, basically, it all works! It was quite difficult sailing, with gusty and shifty winds on a small stretch of water. One capsize, just after I started, I really want to find a way of getting less water in the boat, probably bigger tubes on the sides.

This wednesday from, from our lokal online magazine came around, resulting in a nice article on In Dokkum

It resulted in the first guy on a SUP entering for the RAID extreme. He sounds quite serious, as he did 220 kilometers nonstop doing the Ëlfstedentocht on a sup. Heavy!

Not sure how SUPs cope with waves though, but he may be able to take a sheltered route on the Lauwersmeer… 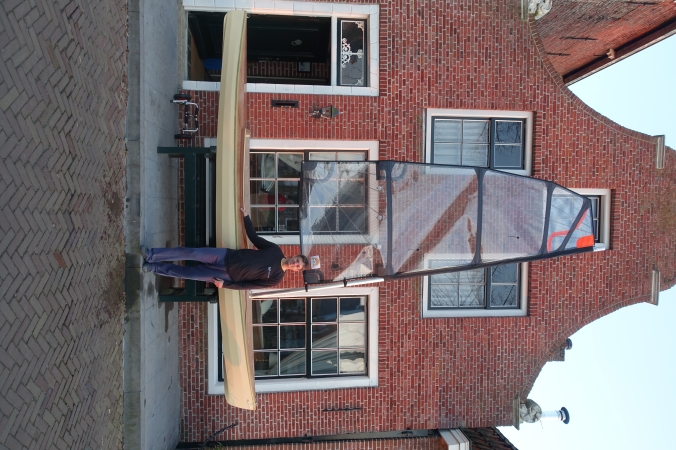 I’m coming out.
This has always the been the plan. The RAID extreme is a go. Adventure racing on the Lauwersmeer, Netherlands. Route of your own choice, craft of your own choice. Just don’t bring an engine. 24 places still available, so be quick to take your spot and start training!

Not sure if I can, so stay tuned 😉

Some big decisions made, such as where to put the mast, and stuff bought. Here’s the latest update on the Artemis project; codename Wolf.

After some decent copying work, from Axel, and Hugh Horton, some tests on glassfibre I started a little fun project today. Making carbon/kevlar deck eyes. It’s quite easy, once you know how:

2. Cut the cloth, and wet it out with epoxy. I made some forms earlier, so I stuffed them in, with some plastic foil in between. Experimenting a bit, I clamped a few of them, some weight in another, another just left. There didn’t seem to be much difference on ways of clamping. I drilled two guide holes in the form on the bottom right to keep consistent on where I put the eyes in. 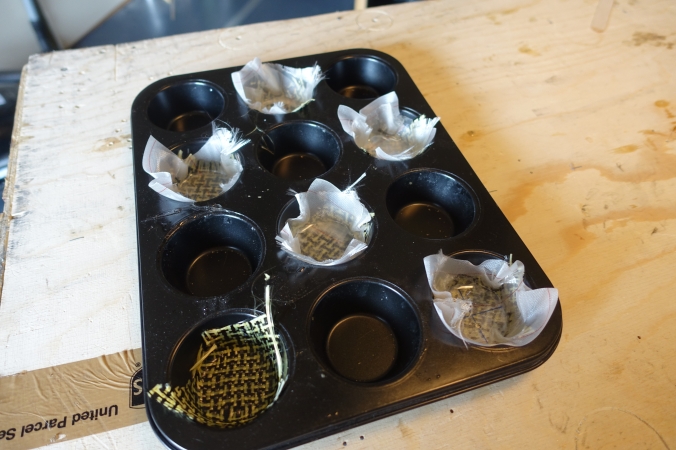 3. Next step is cutting the cups to size (do it when the epoxy is still green), drill a hole through the middle of the cup, stick the dyneema line through the hole, fray the ends of a line of dyneema. 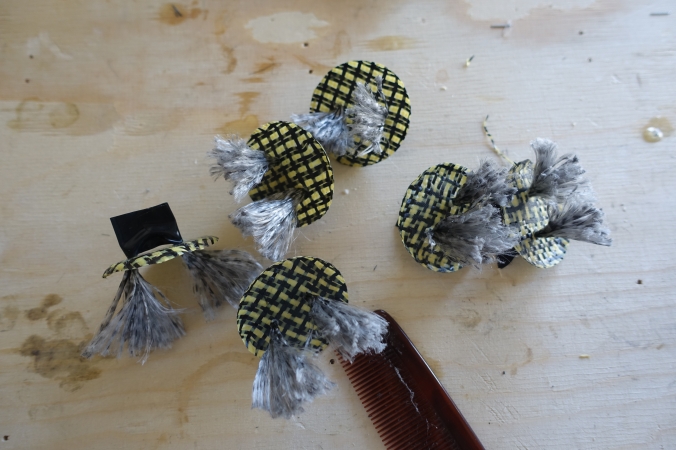 4. Glue the whole thing together, a good dollop of epoxy is enough. I used silica and filleting blend as filler for the epoxy (two versions). I found that making the cups very shallow gives the best results, otherwise the eye gets to heavy (12 grammes instead of 5-7 grammes). I made them about 4 millimeter deep. Enough to tuck all the ends of the dyneema strand in.

5. There you go, you’ve made yourself something beautiful!

6. Testing. I glued to eye to an old bit of wood, then put a stick through it, and stood on it (my weight is 72 kilo). The eye I tested was a first version made with glassfibre on the outside, with not enough epoxy on the inside. I loop came out when I started to jump on the stick, but I couldn’t get the dyneema strand to come loose. Good enough for me. I’m counting on 80 kilo of break strength, but the guys from West got to a minimum of 240 kilos. Good enough for me.Here’s a shot of the eye in use to connect to my hiking strap . It feels scary to hang on to a 5 gramme deck eye, but it is holding so far, and I’ll report it if it breaks. But sure to test yourself, as each design and way of fabricating will be slightly different.

New stage of boatbuilding commences. I had to hoist the hull up to the ceiling to make space for covering the inside of the deck. I’d wish I bought a house with more space! The stuff you see on the hull is filler I applied to the deck (microlight).

Progress during the holidays…

Building progress has been good. I think I’m almost halfway now. With lots of time off for Christmas holidays, I can make some good steps.

The scariest bit of the build is over now. I’ve covered the outside of the hull with carbon cloth, and it seems to have gone on well! I found it quite daunting to work with a 400 euro roll of carbon (I got 25 metres of it on sale ;), then try not to think about messing it up! But, all went well. I watched lots of instructional videos on youtube on how to do things, and it worked more or less as planned. I worked my way from the middle of the boat, up forward. When I had enough epoxy on to keep the cloth in place I trimmed the ends, then folded them around the bow and stern. The stern went well, as I managed to get the cloth folded around fully. This stern will be bulletproof!

Getting so much carbon on the boat is overkill, but I just wanted to play with carbon, and it will help the boat become very stiff, which will help sailing performance.

Next up is to build the deck. I’m trying to get myself from working fast mode into working carefully mode. I’ll want to clear coat the deck, so I’ll need to work cleanly now, as mistakes will be seen! The seam on the middle of the foredeck is my best now, lying very cleanly, and it stays in place with just a bit of tape. 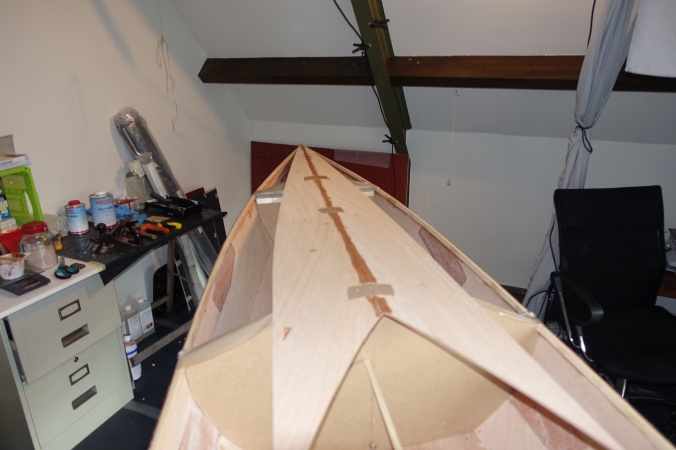 In the meantime Axel has been busy with design and construction of the sliding seat. It cost me a sleepless night when he first sent the plans over. I kept thinking on how to install it in the boat, where my feet would go, how to hike from it, how fast the boat would be when using it…sigh. It will be great fun to build the seat, then the actual sailing… wow…

Another big thing is the mast and sail. All lot of thought has gone into this. Finally, I decided to ask Michael Storer to build me the same sail that Joost Engelen is using for his new canoe build. Is it a 5 sq metre sail, which sets from an aluminium tube. One reef, and, it looks great. Another sleepless night, as I kept on going through the options:

Ultimately, I’ll still want a bigger, fathead sail (does someone have an old moth rig lying around? Maybe a Cherub?), but I’ll have to see how I fare with 5 sq. metres of sail, then see where to go from there.

The nice thing about a project like this is meeting people, and going places. Along the way I had a nice chat with John from Compositesplaza. We decided to keep in touch, and maybe we can do something interesting in the future. They sent me some samples of some new materials they are using, maybe something nice to build outriggers some day?

Then there was an ad, with a guy selling a gennaker. 8 sq metres, and quite close by! This guy turned out to be Marten Jan, from Hallum. He’s a small boat guy, and built his own sail and oar boat, designed by Frank van Zoest. The design is intended to do well in Raid events, and it seems he did well. I even took some photo’s of Marten Jan during the Dorestad Raid! Unfortunately, when seeing the gennaker, I got the creeps, and decided this was a way to big sail for me at this point. I’d need a more moderate size, if I’ll do a genny at all. Maybe a wee jib or genoa will do. Maybe 5 metres of sail is enough?

I’m hoping to come a long way towards finishing the hull this holidays, next up will be deciding where to drill the hole for the mast, and how the deck layout will be, so I can build reinforcements. I’m planning to spend quite a bit of time sanding as well. That will involve lifting the boat out of the window, getting it back in, more gap filling, lifting back out. Hope I’ll have enough patience!

Links: friends, inspiration, my past, my future